A group of six framed paintings, completed during the residency, were displayed

In the theatre foyer at The BRS , for the evening of the Annual BHA dinner.

Great to have this opportunity to show them in Newmarket, and receive  positive feedback,  before they go on to be part of The Artist Residency at Newmarket exhibition in London, next May.

I was delighted to be invited to take part in the Artists Painting Day at The Munnings Museum, Castle House,  at Dedham. Having visited this inspirational house and studio last summer, it was great to return again,  and this time to be painting there. The Artist painting day was organised by Jenny Hand, the head curator at the museum, as a part of the current  ‘ Behind the lines’ exhibition of paintings of the Canadian Cavalry Brigade that Munnings had painted in France, commissioned by the Lord Beaverbrook’s Canadian War Memorial Fund, towards the end of the First World War.

Jenny organised an encampment re-enactment scene, complete with military figures in uniform, horses, ponies and bell tents to be set up in the grounds at Castle House, for the group of invited equine artists to paint for a day, while visitors to the museum could observe. It was a sunny day, with great light and the camp re-enactment scene was wonderful, set up in front of the trees, in the beautiful grounds of Castle House, where Munnings himself had so often painted. So interesting to meet the other artists involved, and to see the different approaches and styles of each.  And to interact with the exhibition visitors who gathered round yo observe us at work. I enjoyed painting numerous watercolour studies from the scene. With an emphasis on catching the light and movement within it. The resulting paintings from the group of artists will be exhibited in Munnings’s studio at Castle House, later in October.

Here are a couple of my watercolours from the day, which will be featured in the exhibition:

‘Behind the lines, encampment scene’ 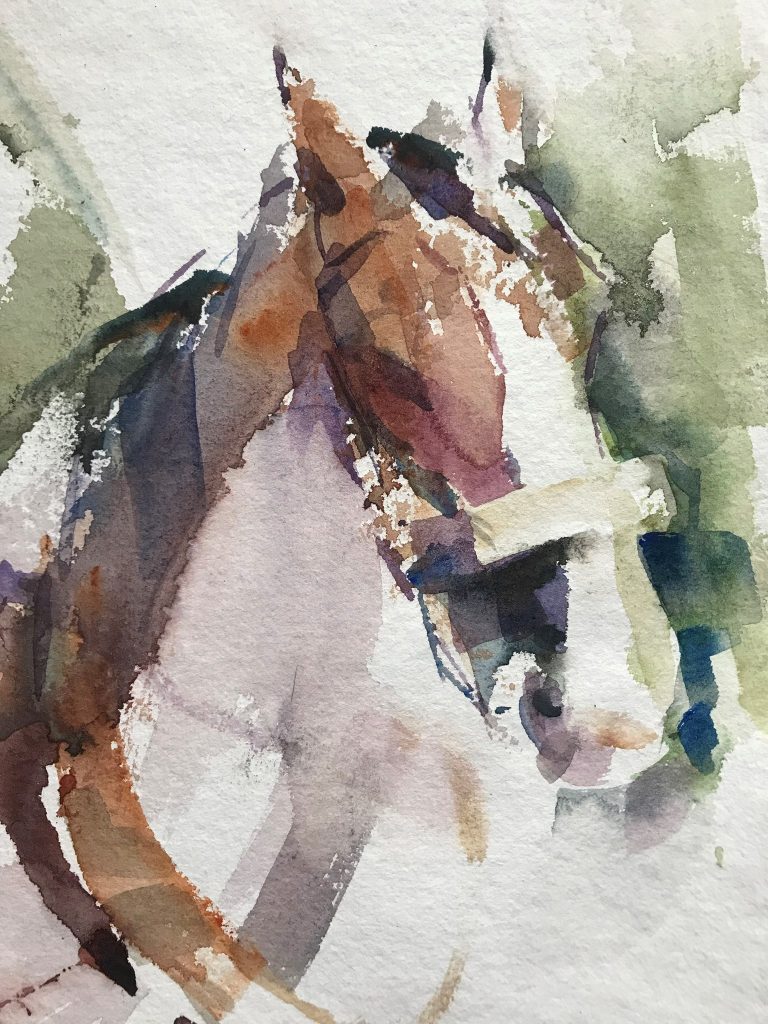 Hosted by the BRS , it was a pleasure to design and teach a 3 day residential painting group workshop at Newmarket, as part of my residency programme. We were blessed with fine weather, and  the students enjoyed the variety of painting venues and activities. Each one designed with the aim  to provide an introductory view and visual taster of the racing scene at Newmarket, both historically and currently.

The workshop included a day at the BRS itself, sketching equine portrait studies, a morning at Warren Hill Gallops, observing strings of racehorses on exercise, an afternoon sketching from the historic equine pictures at Palace House, and finally a day at the races at The July Course. They all came away  with some fantastic work and were clearly inspired by the whole scene. And we had some winners on the day!

Here are some of the students sketches: 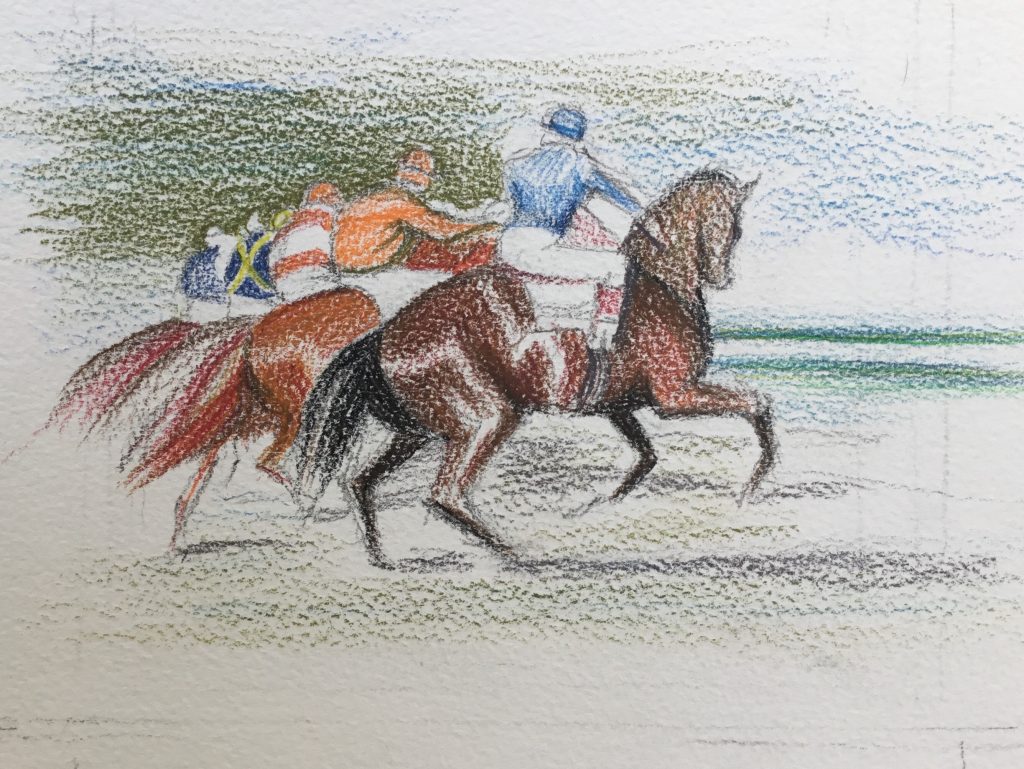 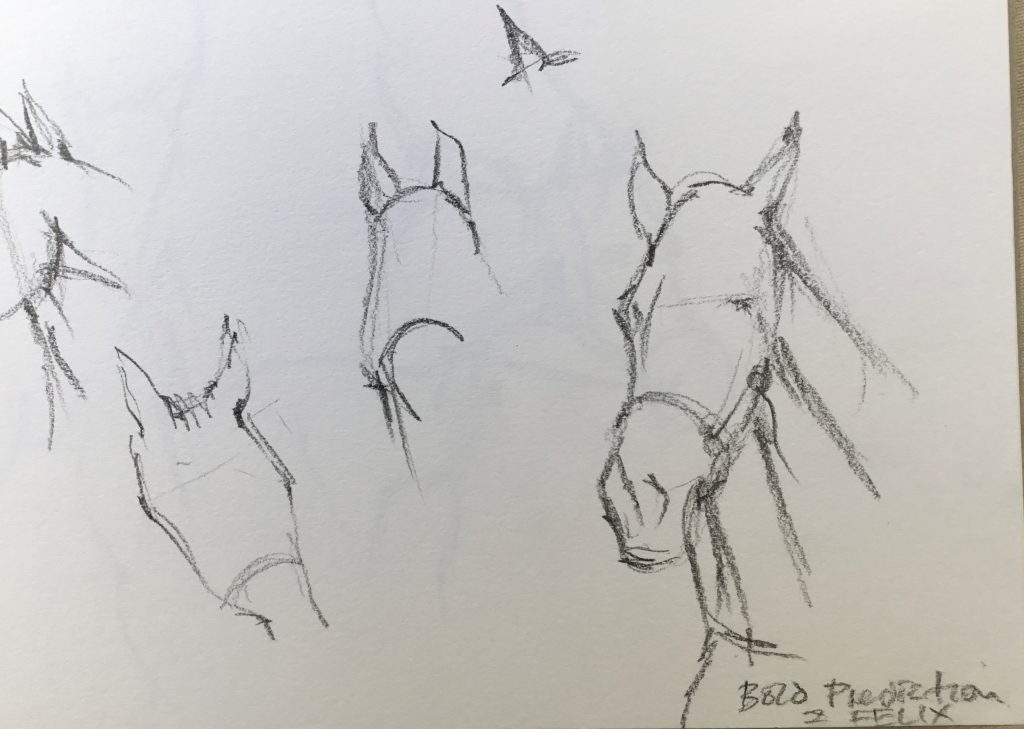 Pencil head studies of Bold Prediction. At the BRS, By Gill de Warren.

Watercolour study by Virginia Gibbons. At the BRS workshop studio. 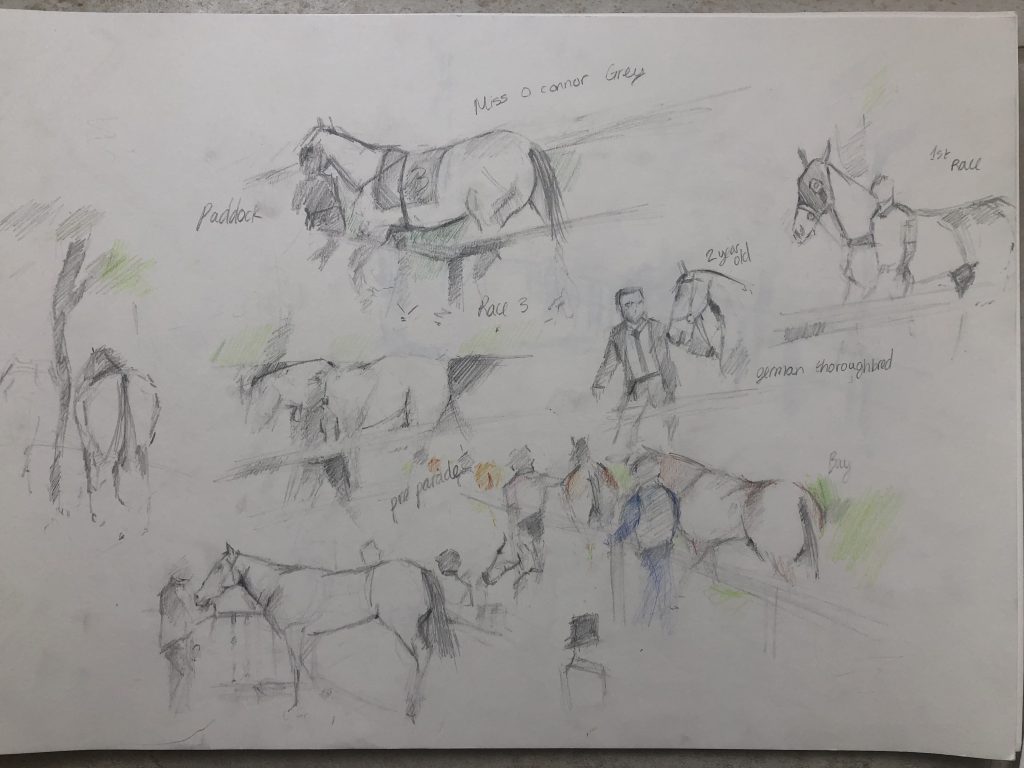 Pencil studies at The July Course paddock, by Imogen Friessner-Day. 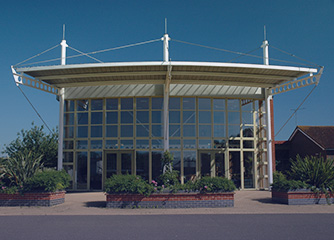 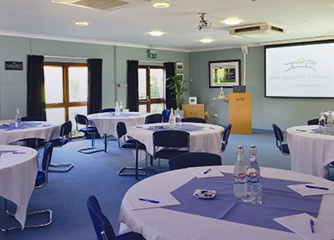 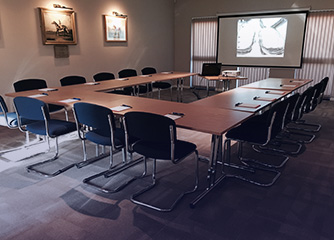 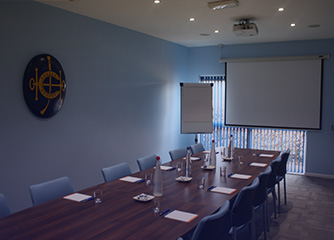